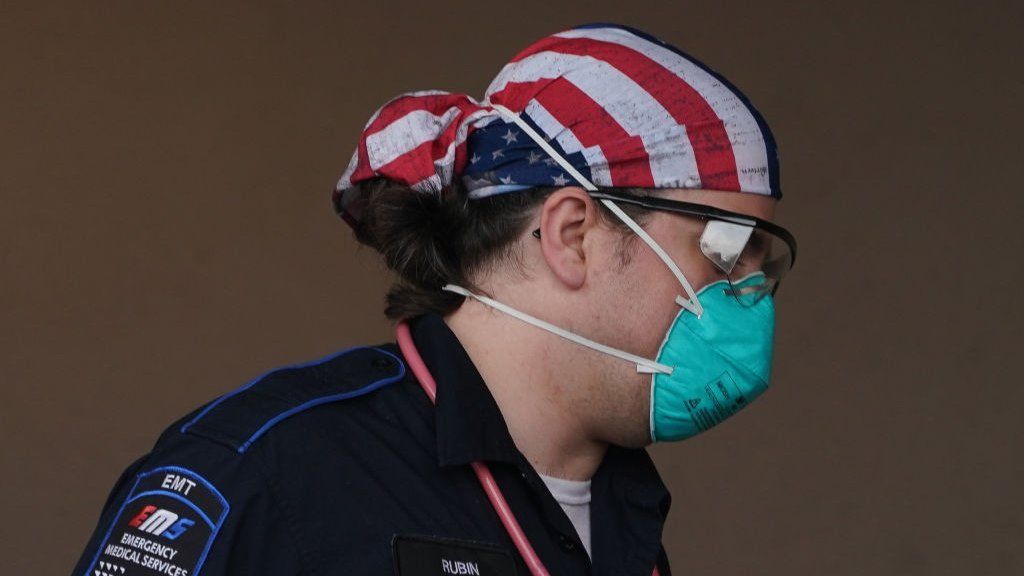 The number of infections and deaths in New York, the epicentre of the US coronavirus outbreak, is dropping for the first time, officials say.

But in a news conference on Sunday, Governor Andrew Cuomo said it is too early to know the data’s significance.

It comes as the virus continues to spread around the US and health officials say the worst is yet to come.

The US Surgeon General warned that this will be “the hardest and the saddest week of most Americans’ lives”.

“This is going to be our Pearl Harbor moment, our 9/11 moment,” Surgeon General Jerome Adams told Fox News on Sunday.

“Only it’s not going to be localised. It’s going to be happening all over the country and I want America to understand that.”

What’s the latest in New York?

On Sunday, Mr Cuomo reported 594 new deaths for a total of 4,159 deaths in New York, the state hit hardest by the coronavirus so far.

He said there are now 122,000 New York residents who have been infected. But he added that nearly 75% of patients who have required hospitalisation have now been discharged.

Bodies are loaded onto a refrigerated lorry which is serving as a makeshift morgue.

Patients requiring hospital are down for the first time in a week, and deaths are down from the prior day, he said.

There were 630 deaths reported in the previous 24 hours.

“The coronavirus is truly vicious and effective at what the virus does,” he told reporters in Albany, the state’s capitol. “It’s an effective killer.”

It’s too early to know if New York is currently experiencing its apex – the highest rate of infection that graphics behind Mr Cuomo referred to as “the Battle on the Mountain Top”.

He also said it is too early to know if cases will drop off quickly after the apex, or if they will decline slowly – and at a rate that still will overwhelm hospitals.

“The statisticians will not give you a straight answer on anything,” he said about the so-called “curve” – the chart that tracks the rate of infections.

“At first it was straight up and straight down, or a total ‘V’. Or maybe its up with a plateau and we’re somewhere on the plateau. They don’t know.”

Mr Cuomo said that despite “cabin fever” from staying home, people must continue to remain inside except for essential activities such as exercise and food shopping.

New York City Mayor Bill de Blasio announced in a news conference that the city had enough ventilators to last until Tuesday or Wednesday, after initially saying that the state could run out by Sunday.

“We have bought a few more days,” he declared, adding that the city had distributed 2,865 ventilators and had 135 left in the stockpile.

“I want to be clear, it only means a few more days, nothing more I can guarantee beyond that,” he told reporters.

Banner image reading ‘more about coronavirus’BannerWhat is the situation around the US?

Infection rates and new deaths are growing in cities such as Washington DC, Detroit and New Orleans, even as around 90% of Americans are under some form of mandatory lockdown requiring them to stay home.

Governors of states continue to warn of a dire shortage of needed medical supplies, including ventilators and face masks.

New Jersey, a state that borders New York, reported more than 3,000 new infections on Sunday, bringing the state-wide total to 37,505. There have been 917 coronavirus-related deaths in New Jersey.

The southern state of Louisiana – one of the hardest hit in the US – reported a 20% increase on Sunday with 3,010 new cases. It also reported 477 deaths.

Michigan – with the third worst outbreak in the US – has suffered nearly 16,000 cases and 617 deaths, officials said on Sunday. Detroit continues to be the state’s major hotspot with nearly 5,000 cases and 158 deaths.

Speaking to NBC News on Sunday, Dr Anthony Fauci – the nation’s chief immunologist – said its too early to say the situation is “under control,” as President Donald Trump has frequently claimed.

“That would be a false statement. We are struggling to get it under control and that’s the issue that’s at hand right now.”

Surgeon General Adams said that California and Washington have seen their transmission rates slow due to mitigation efforts, but warned that everyone must follow the federal government’s health guidance, including wearing a face mask in public.

“I want Americans to understand that, as hard as this week is going to be, there is a light at the end of the tunnel if everyone does their part for the next 30 days,” he said.

Cases around the US

Elsewhere in the US:

A pastor in Florida, who has already been hit with several misdemeanours, says he will defy orders banning large gatherings to hold a Palm Sunday celebration

The White House is not holding its daily Covid-19 briefing, due to the Christian holiday

Mr Trump says he will defy the government’s guidance to wear masks in public, after the Centers for Disease Control and Prevention announced the new mandate last week