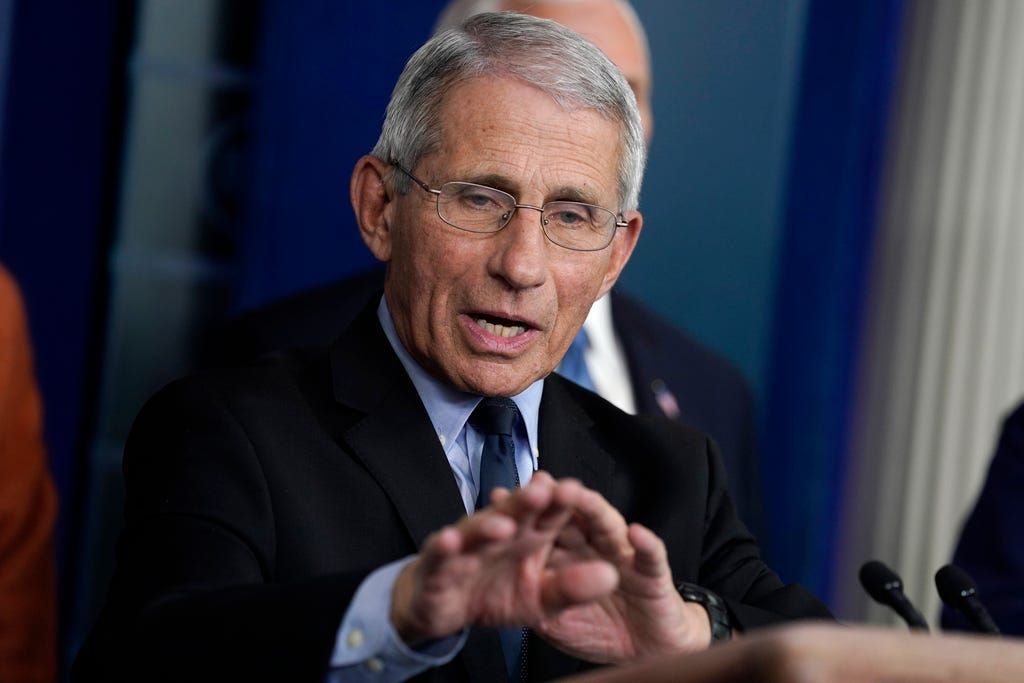 Imagine generating a vaccine for the novel coronavirus from your immune system.

The virus that causes COVID-19 has swept the globe with about 1.3 million infections and 70,000 deaths through Sunday evening.Development of a widely available vaccine can take a year or more while a virus continues its rampage.

Key to the race to develop a vaccine for the new coronavirus is a technology that uses the virus’ genetic code to essentially persuade your body to make its own vaccine.

This technique is faster than egg-based manufacturing, which produces the majority of annual flu vaccines and led to delays in distributing a vaccine for H1N1 during the 2009 pandemic.

And it’s enabling a possible vaccine for the new coronavirus to be developed in record time.

Coronavirus updates: Get the latest in USA TODAY’s live blog

“It’s quicker to get started,” said Clem Lewin, who is working on vaccine candidates for the manufacturer Sanofi Pasteur. “All you need is the blueprint for the protein.”

Testing still will take time. Scientists must determine whether any of several vaccine candidates fight the virus effectively. If so, they need to determine the proper dose. This tinkering is what could take a year or more.

When the first potential vaccine from the manufacturer Moderna was injected into people on March 16, Anthony Fauci, director of the National Institute of Allergy and Infectious Diseases, said he believed the coronavirus vaccine was being developed at a record pace. It took 63 days to go from identifying a virus’s genetic sequence to testing a vaccine in people.

Panic, then neglect: Prior pandemics gave us lessons to fight the coronavirus. But funding dried up.

Dr. Anthony Fauci, the director of the National Institute of Allergy and Infectious Diseases, speaks at a press briefing with the coronavirus task force on March 17, 2020.Scrambling egg-based production

Several manufacturers pursuing a vaccine for the latest coronavirus have been aided by a technological innovation.

The method that Moderna, Sanofi and others are pursuing is different from traditional vaccinations, in which a weakened or dead version of the virus is introduced into the body, triggering it to create antibodies that would attack the live virus should the person be exposed to it.

In the new approach, pieces of messenger RNA that hold the chemical template of a spike protein from the SARS-CoV-2 virus are injected into a human, said Mark Slifka, a professor of viral immunology at Oregon Health and Science University in Portland, Oregon.

The spikes are what the virus uses to attach to a human cell — the first step in sickening someone.

In response to the injection of those molecules, the cells in the body produce the spike protein encoded by that mRNA. That triggers the body to mount an immune response to that viral protein, just as in traditional vaccines.

“Essentially, the patient makes their own vaccine,” says the narrator of a Moderna video about the vaccine. “This cuts out the middleman.”

Fauci said volunteers would be given two injections of the potential coronavirus vaccine, the second after 28 days. The doses are 25 milligrams, 100 milligrams and 250 milligrams, he said.

“The individuals will be followed for one year — both for safety and whether it induces the kind of response that we predict would be protective,” Fauci said.

Moderna, the manufacturer conducting the initial tests, projected the first commercially available vaccine in 12 to 18 months. A corporate filing March 23 said CEO Stephane Bancel told Goldman Sachs “it is possible that under emergency use, a vaccine could be available to some people, possibly including healthcare professionals, in the fall of 2020.”

US coronavirus map: Tracking the outbreak

Get daily updates in your inbox: Sign up for our newsletter now.

Why change the menu from reliable eggs?

Most flu vaccines are produced from fertilized chicken eggs, a decades-old process that takes four to five months. The mRNA process is much faster.

Delays in producing an H1N1 vaccine spurred health officials to urge development of other technologies, according to a Government Accountability Office report.

“It’s a state-of-the-art technology — for the 1950s,” Luciana Borio, then director for medical and biodefense preparedness at the National Security Council, said at a 2018 conference on the 100th anniversary of the Spanish flu pandemic.

A New England Journal of Medicine review of the response to H1N1 found that 78 million doses of the vaccine were eventually produced for 70 countries worldwide, but only after two waves of the illness worldwide.

“The most serious operational shortcoming … was the failure to distribute enough influenza vaccine in a timely way,” the report said. The cause: distribution problems, “a shortfall in global vaccine-production capacity and technical delays due to reliance on viral egg cultures for production.”

Developing a vaccine is laborious, said Harvey Fineberg, a former president of the U.S. Institute of Medicine and former dean of the public-health faculty at Harvard University.

One step is confirming that a possible vaccine doesn’t cause bad reactions in patients. Then scientists examine how much vaccine is required for an antibody response. And they must verify the vaccine actually protects against infection, which is why it’s ideal to test during an outbreak.

All those steps come after scientists identify the genetic sequence to target for a vaccine.

“It’s like saying, ‘I’ve got my architectural plans — my house must be ready to move into,’” Fineberg said. “There are a lot of things you need to do between now and being ready to open the door.”

The manufacturers pursuing coronavirus vaccines are working closely with the Centers for Disease Control and Prevention, the Food and Drug Administration, the National Institute of Allergy and Infectious Diseases and the Biomedical Advanced Research and Development Agency.

Moderna is working on 13 potential vaccines. Sanofi is working on two candidates: an mRNA candidate with the company Translate Bio and another option in collaboration with the Biomedical Advanced Research and Development Agency.

Other companies are pursuing other technologies. GlaxoSmithKline is working with China-based Clover Biopharmaceuticals through a different process to produce a cell-based vaccine.

Johnson & Johnson, which is working on several possible vaccines, announced last week it would invest $1 billion for vaccine research, development and testing. The company said it could produce 1 billion doses of a vaccine when the time comes.

“The biggest challenge we face in the United States is not developing a vaccine, tricky as that step is,” Coons said in a statement. “It’s that we lack the domestic manufacturing capacity to quickly produce a vaccine once it’s proven and deliver it to the American people.”

“We and all the other manufacturers are working as quickly as possible to accelerate these programs while ensuring the vaccine is safe and effective,” Lewin said. “It isn’t business as usual for anybody.”

CoronavirusWhat about changes to flu vaccines?

The technology used to develop a coronavirus vaccine won’t affect the annual flu vaccine because they are different viruses requiring different approaches. But even before the pandemic, steps were underway to hasten changes to the flu vaccine.

President Donald Trump signed an executive order in September calling on manufacturers to move away from egg-based vaccines because of “critical shortcomings,” including the months they take to produce. The order anticipated a pandemic more lethal than the 1918 Spanish flu, which killed 675,000 Americans.

William Schaffner, professor of infectious diseases at Vanderbilt University, said one reason to change vaccine production is that growing the vaccine in eggs allows mutations that make it less effective.

“People were working on this already,” Schaffner said. “That sort of commitment, a presidential commitment, plus the moneys that go with it, really put the pedal to the metal for future research.”

Egg-based vaccine manufacturing has been reliable. Developing another process would require a multimillion-dollar investment in an industry with small profit margins, Schaffner said.

“Moving away from egg-based production is not like flipping a switch,” he said. “I’m sure all the manufacturers are all thinking about this, but how and how quickly they do it is another matter.”

Other options include cell-based and recombinant processes. A cell-based vaccine is grown in a mammal’s cells, such as kidney cells from monkeys or dogs, rather than in a hen’s eggs. A recombinant vaccine is created synthetically from the DNA, or genetic instructions, of a protein from the flu virus. The DNA is then combined with a baculovirus, which infects invertebrates.

A loftier goal is to develop what is called a “universal vaccine,” which could last five years at a time. Such a vaccine could be administered any time of year during a doctor’s visit, rather than just in the fall.

Doing that would require changing how the vaccine attacks the flu virus, which is shaped like a sphere with lollipops protruding from it. Vaccines so far have targeted the candy at the end of the lollipop, which changes every year.

A vaccine that targets the stem of the lollipop could offer protection for years, Shaffner said. “If you get vaccinated, you’re vaccinated against a whole series of different influenza viruses,” Schaffner said.

The coronavirus pandemic has come during a severe flu season. This year’s vaccine is about as effective as usual, according to a Centers for Disease Control and Prevention study of cases through Feb. 8. The study found the severity for people up to 49 years old including hospitalizations was worse than other recent seasons, including the severe year of 2017-2018.