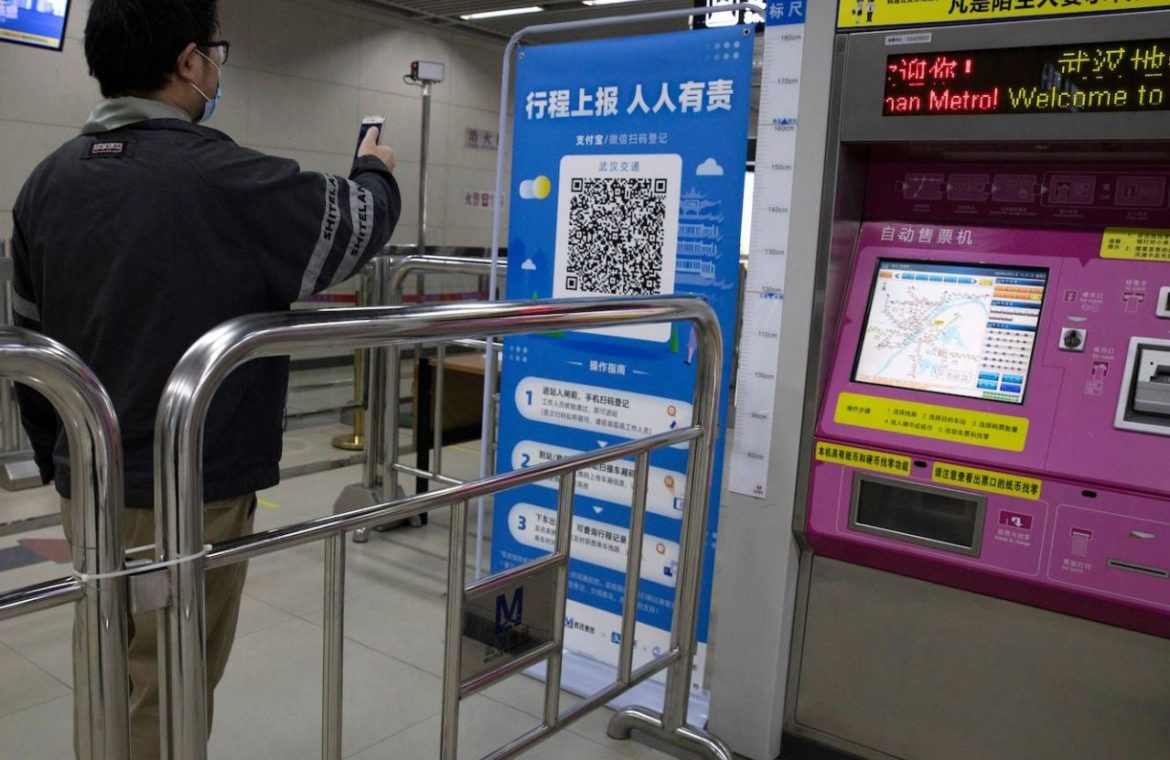 A composite image of a smartphone screen showing a green pass, and a man scanning a QR code at a Wuhan subway station on April 1, 2020.

Provinces and cities across China are slowly lifting their strict coronavirus lockdown measures. Wuhan, where the coronavirus broke out, just lifted its lockdown.

But as people resume their lives, local authorities are trying to prevent further spread by controlling citizens’ movements via smartphone software installed in WeChat and Alipay, two hugely popular apps.

After people fill out a quick health survey, the software issues them with a colored health code — green, yellow, or red — which dictates whether they can leave the house and where they can go.

Officials manning various checkpoints across the country are checking people’s health apps to see where they are allowed to go. Anyone with a green code is free to travel.

But Western nations are critical of this mass surveillance tool and questioning what else the data is being used for.

Scroll down to see how it works.

As provinces and cities across China gradually roll back their coronavirus lockdown measures, authorities trying to prevent another outbreak are using smartphone software to monitor citizens’ health and dictate where they go.

Officials in Wuhan, where the virus first broke out, are also using this software to limit its citizens’ movements, the BBC reported. The city lifted its lockdown at midnight local time on Wednesday.

The software is installed in WeChat and Alipay, the instant-messaging app, and Alipay, the online payment platform operated by Alibaba. Almost everyone with a smartphone in China has one or both of these apps.

In order to travel, people have to fill out a quick health survey. After that, the software issues them with a colored health code — green, yellow, or red — which dictates whether they can leave the house and where they can go.

The initiative was first introduced by officials in the eastern city of Hangzhou, but others have since followed suit. As of February 25, the program was being used in 200 Chinese cities. This number has likely grown.

Scroll down to see how the technology works and why some surveillance experts are concerned.

As coronavirus cases appear to plateau in China, authorities are relaxing their lockdown measures and encouraging people to start leaving their homes again.

Staff members move barriers in front of a railway station of Wuhan on the first day inbound train services resumed on March 28, 2020.

Many cities have imposed strict lockdown measures, with rail and road links severely restricted or completely shut off, to avoid further spread of the coronavirus.

The city of Wuhan, which has been under an intense lockdown since January 23, lifted its restrictions at midnight local time on April 8.

The rest of Hubei province, where Wuhan is the capital, started easing its restrictions in late March.

And as people start moving freely again, the government is trying to keep track of anyone who might still be infected to avoid further outbreak.

To do this, local governments integrated a tracking software into two commonly-used apps: WeChat, the instant-messaging app, and Alipay, an online payment platform part-owned by Alibaba.

A woman waits for her train at a subway station after entering with a green pass in Wuhan on April 1, 2020.

Alipay has about 900 million users across China, according to The New York Times.

This means the apps are providing the technology and access to the health programs, but local governments are creating the database and issuing the health codes.

The initiative was first piloted in the eastern city of Hangzhou. Authorities there first launched a “health code program” on a government website, and later embedded it into the Alipay app being used by people in the area, the Financial Times reported.

The apps can still perform their normal functions.

To start traveling again, people have to fill out a questionnaire that asks for details like body temperature and health background. The software then analyzes it and generates a color code — green, yellow, or red — that identifies a person’s health status.

A passenger holds up a green pass on their phone on a subway train in Wuhan in central China’s Hubei province on April 1, 2020.

A passenger scans a QR code to get his green pass at a subway station in Wuhan on April 01, 2020.

A red code means you are either have the coronavirus, had a fever or other symptoms, are still waiting for a diagnosis.

Yellow means you’ve had contact with another infected person, but haven’t finished your two-week quarantine.

A green code means you’re symptom-free and allowed to travel. Anyone with a green code can go past checkpoints in subway stations, restaurants, hotels, and apartment blocks.

A QR code is set up for passengers to check their green pass status at a subway station in Wuhan on April 01, 2020.

Here’s what one of these checkpoints, seen in a subway station in Hangzhou, looks like. People show their codes on their phones to a security guard, who either wave them through or stop them.

People are constantly reminded that in order to get around, they must show their codes. Here, a staff member on a Wuhan subway is holding a sign that reads: “Always wear a face mask, avoid gatherings, scan code when getting off the train.”

A staff member holds a placard while standing among passengers on a subway train after service resumed in Wuhan on March 28, 2020.

On February 25, the system had already been in use in at least 200 cities, with the goal of a nationwide rollout.

A passenger shows a green QR code on his phone proving his health status to security upon arrival at Wenzhou railway station on February 28, 2020.

But it’s still unclear how exactly the system classifies people and where the data is analyzed. Some users even reported seeing their color codes change without explanation.

Security personnel at a checkpoint in Wuhan on April 01, 2020.

An Ant Financial representative did not respond to Business Insider’s request for clarification.

Experts and activists have criticized China’s mass surveillance, and are questioning what else this data is being used for.

A passenger shows a green QR code on his phone at Wenzhou railway station on February 28, 2020.

“So there’s a concern that although this data is being perhaps collected for a legitimate purpose, that it could potentially and eventually be misused in ways that we can’t predict right now.”

Experts have also noted that this sort of surveillance is not unlike that in Xinjiang, where millions of Uighur Muslims are monitored by the Chinese government.

A police officer in Xinjiang watches over the population in Kashgar.

Referring to the app, New York Times reporter Paul Mozur tweeted: “The color codes, checkpoints, and phone searches all smack of policies carried out in Xinjiang. People in China’s east aren’t used to it.”

Both Tencent and Alibaba have firmly denied providing any user data to the government’s health code program, saying that the developers have to ask for user permission before obtaining data outside the questionnaire.

Residents make an Alipay transaction in Wuhan on April 2, 2020.

A representative for Ant Financial, which operates Alipay, told Business Insider in a statement:

“We believe digital technology can and should play an active role in helping contain the global spread of the COVID-19 outbreak.

“Ant Financial requires that all third-party developers, including those who offer health code services using our technology platform, strictly adhere to our data security and privacy requirements, which include obtaining user consent before providing services.”

Tencent and Alibaba, which part-owns Ant Financial, also said that the government health software hosted on their platforms are required to ask for user permission to access their locations, the Financial Times reported.

But people in China think the system is vital in protecting public health, and say it makes them feel “safe.”

Wu Shenghong, who lives in Wuhan, told the Associated Press that the system reassures her that people who are not considered healthy “are definitely not running around outside. I feel safe.”

An unnamed Shanghai resident also told Reuters in mid-March: “It’s my first time to come outside after the epidemic. But I already used the QR codes several times and I think it’s good.”