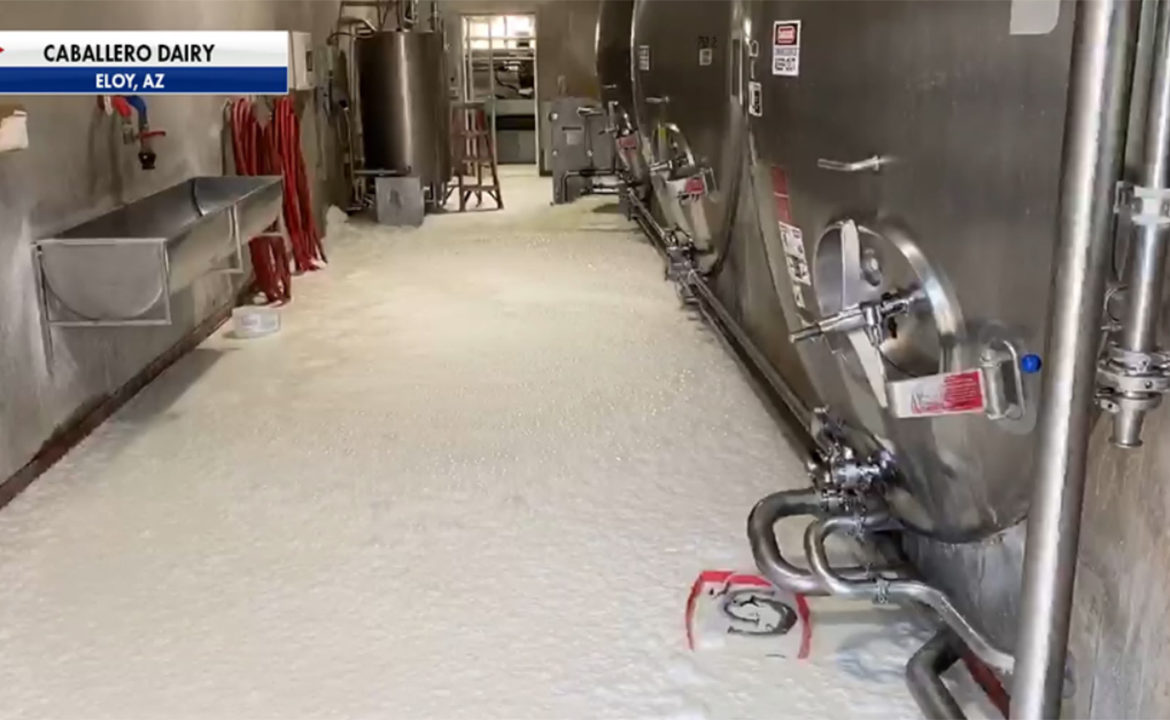 PHOENIX — The coronavirus pandemic has taken a huge toll on Arizona’s dairy industry as the sudden closure of restaurants, schools and other businesses throughout the U.S. has reduced the demand for dairy products, forcing farmers to dump millions of gallons of milk and cream.

“You can’t stop a cow from milking so the milk keeps pouring in, and what we’re doing, of course, is [continuing] to make powder and… filling up warehouses. So, we went from a 20-day inventory of powder to a 65-day inventory of non-fat,” said Keith Murfield, the CEO of the United Dairymen of Arizona.

The Coronavirus pandemic has forced dairy farmers across the U.S. to dump their milk as sales have taken a huge hit. Craig Caballero’s dairy farm in Eloy, Arizona, had to dump its milk last week. (Caballero Dairy)

The group has collected and processed dairy from some 70 farms across the state. They said sales to food services like restaurants and fast food businesses have been down by 75-80 percent.

“Every day is a new challenge and it’s something that we’ve never seen before… and with the restaurants being shutdown and those sales being diminished, it’s really created a backlog,” said Craig Caballero, the owner of Caballero Dairy and board president of the United Dairymen of Arizona.

Dairy farmers across the U.S. started dumping milk two weeks ago. March typically has been a high-production month as cows produce more milk, therefore creating an increase of product. The lack of sales in Arizona meant warehouses have been overflowing, forcing farmers to dump about one million pounds of unused milk every day. As of Sunday, the United Dairymen of Arizona said they’ve dumped around 12 million pounds of milk.

“It’s one of the most discouraging things to the producers, you go there and you have to dump their milk. You know they make high-quality milk, some of the best milk in the nation, and then we have them dump it down the drain,” Murfield said.

Sales also have taken a hit in grocery stores. Some stores started to limit how many gallons of milk people could buy, although they’ve largely lifted the restrictions since then. The United Dairymen of Arizona said people aren’t buying as many dairy products as they used to, meaning milk prices are going to drop by 40 percent over the next two months. They said things won’t get back to normal until businesses start to reopen again.

“It shakes this industry at the core, to the point where I never could have ever thought the dairy industry in the United States could be decimated,” Caballero said.

Arizona farmers have shipped some 40 percent of their dairy products to Mexico, creating $150 million a year. (Caballero Dairy)

Arizona farmers also took a hit on export sales. They have shipped some 40 percent of their dairy products to Mexico, creating $150 million a year. Arizona Gov. Doug Ducey noted in a news release, “The Mexican Ministry of Health announced it would cease administrative operations, effectively halting the export of dairy products across the border from Arizona to Mexico.”

That temporarily delayed the export of dairy, creating a backlog for farmers. It has since been resolved as farmers said export permits slowly have returned to normal.

“It becomes an extreme hardship on our cash flow, at both the dairy farm level and at the coop level,” Caballero said.

“We just encourage people to please eat dairy products so we can get milk prices back up for these dairy producers,” Murfield said.