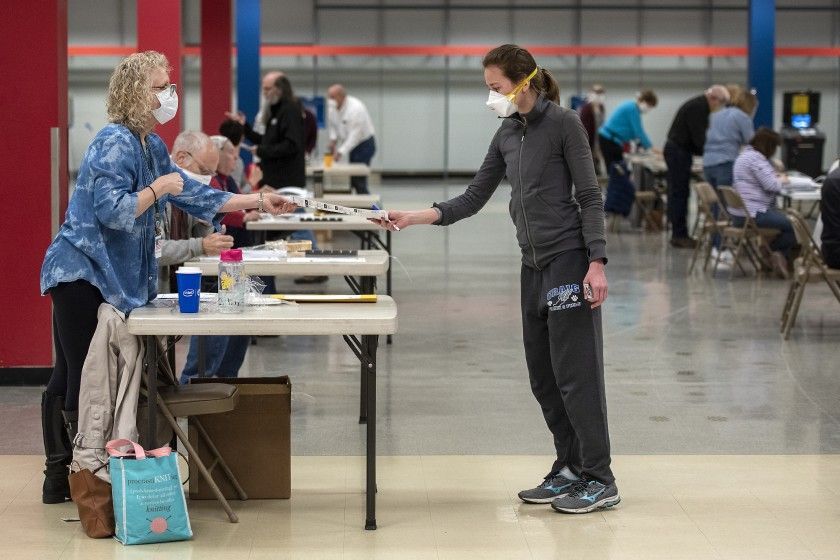 Nearly a week after Wisconsin voters headed to polls in the middle of the COVID-19 pandemic, the vote tally showed Joe Biden overwhelmingly beating Bernie Sanders in the state’s presidential primary, the Associated Press projected.

The contest was not consequential — Biden had already won enough delegates to almost certainly win the Democratic nomination by the time the state’s primary took place Tuesday. Sanders suspended his campaign the following day and endorsed Biden on Monday.

But the election drew great scrutiny, unfolding amid the coronavirus crisis that has killed more than 23,000 people in the U.S. and prompted the delay of in-person elections in 16 states and Puerto Rico.

Republicans leaders in Wisconsin successfully fought Democratic efforts to delay the election, which was marked with voters donning masks to wait in line sometimes for hours and complaining that they did not receive absentee ballots in the mail.

Though the Democratic nomination was all but decided, there was a critical judicial state Supreme Court election on the ballot that will impact legal decisions in the state for the next decade.

The race between conservative incumbent Justice Daniel Kelly and liberal rival Jill Karofsky was too close to call.

The skirmishes over the Wisconsin election also offer a preview for potential battles over the November election. Democrats are pushing for more absentee voting, while President Trump is alleging, without offering any evidence, that expansion of mail balloting would be a breeding ground for election fraud.

The only other election to take place in recent days was Alaska’s primary on Saturday, which Biden won with 55% to Sanders’ 45%.

Sanders is no longer seeking the nomination, but he is continuing to compete for delegates until the Democratic National Convention. That would give him and his supporters more influence over the party’s platform on issues such as “Medicare for all” and on nominating rules.

“Honestly, those are important for getting the Democratic Party to say in one place what they stand for, what they’re willing to fight for,” said Neil Sroka, a spokesman for Democracy for America, a liberal PAC that backed Sanders. Though the nominee is not bound by the platform “it’s pretty rare that we make progressive moves in a platform and then scale back in the future.”

Sanders backers also said having a vocal, contingent force could help ensure that Biden doesn’t forget about the priorities of the liberal wing of the party and pivot to the center in the general election. It’s a core concern among Sanders supporters such as Rep. Alexandria Ocasio-Cortez of New York.

Biden has tried to court Sanders backers, notably by calling for an expansion of Medicare eligibility and student debt relief on Thursday.

Ben Tulchin, Sanders’ pollster, said such moves do not go far enough. Sanders supporters’ voices are critical to pressing Biden to embrace more liberal policies, the need for which is thrown into sharp relief by the healthcare and economic needs causes by the coronavirus, he said.

“All the major problems Bernie’s been talking about for many years are just coming to the fore in a harsh, severe way — the real consequences of our rigged economy and our corrupt political system,” Tulchin said before Sanders endorsed Biden. “This isn’t just about influencing the platform and some party rules. This is about making sure the Democratic Party is truly advocating for people who are getting hammered by this crisis.”