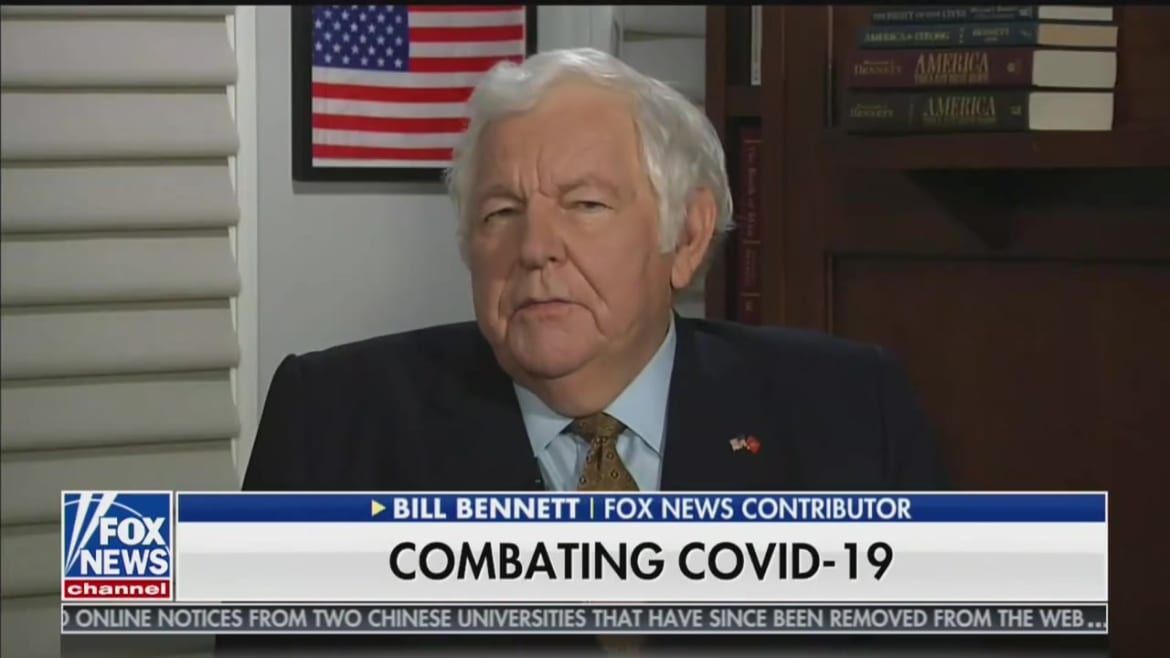 Fox News contributor Bill Bennett insisted on Monday morning that the novel coronavirus that has killed over 22,000 Americans in roughly a month isn’t a pandemic at all, instead comparing it to the seasonal flu.

Appearing on Fox & Friends, Bennett—who previously served as education secretary under President Ronald Reagan—argued that the threat of COVID-19 has long been overstated and that strict social-distancing guidelines have been unnecessary.

Referencing a recent op-ed he wrote in which he compared the current death toll from coronavirus to those of drug overdoses and diabetes, Bennett noted that a current model projects 60,000 Americans will die from COVID-19.

“But if you look at those numbers and see the comparable, we’re going to have fewer fatalities from this than from the flu,” he added.

Bennett went on to grouse that “we scared the hell out of the American people” and put a “major dent in the economy” over the virus before asserting that the disease’s impact shouldn’t have caused mass closings and physical-distancing restrictions.

“This was not and is not a pandemic, but we do have panic and pandemonium as a result of the hype of this and it’s really unfortunate to look at the facts,” he proclaimed.

Co-host Brian Kilmeade, for his part, did respond that “it is labeled a pandemic” while also agreeing with Bennett that COVID-19 has a high survival rate. Currently, the mortality rate from coronavirus in the United States is at 4 percent and medical databases show one in ten middle-aged hospitalized coronavirus patients do not survive. The seasonal flu, meanwhile, has a fatality rate of 0.1 percent.

Fox News came under fire last month for severely downplaying the threat of the virus prior to President Donald Trump declaring a national emergency in mid-March with opinion hosts and commentators repeatedly comparing the deadly virus to the flu, saying that was the “worst-case scenario.”

While Fox News brass has taken the pandemic seriously as several of its employees have been diagnosed with COVID-19, pro-Trump Fox News stars have pivoted back to minimizing the crisis while calling for the president to quickly re-open the country and economy.

Read more at The Daily Beast.

Got a tip? Send it to The Daily Beast here

Get our top stories in your inbox every day. Sign up now!

Daily Beast Membership: Beast Inside goes deeper on the stories that matter to you. Learn more.

Don't Miss it CDC study suggests coronavirus can travel 13 feet in air and live on shoes
Up Next Alabama cannot ban abortions as part of its coronavirus response, federal judge rules