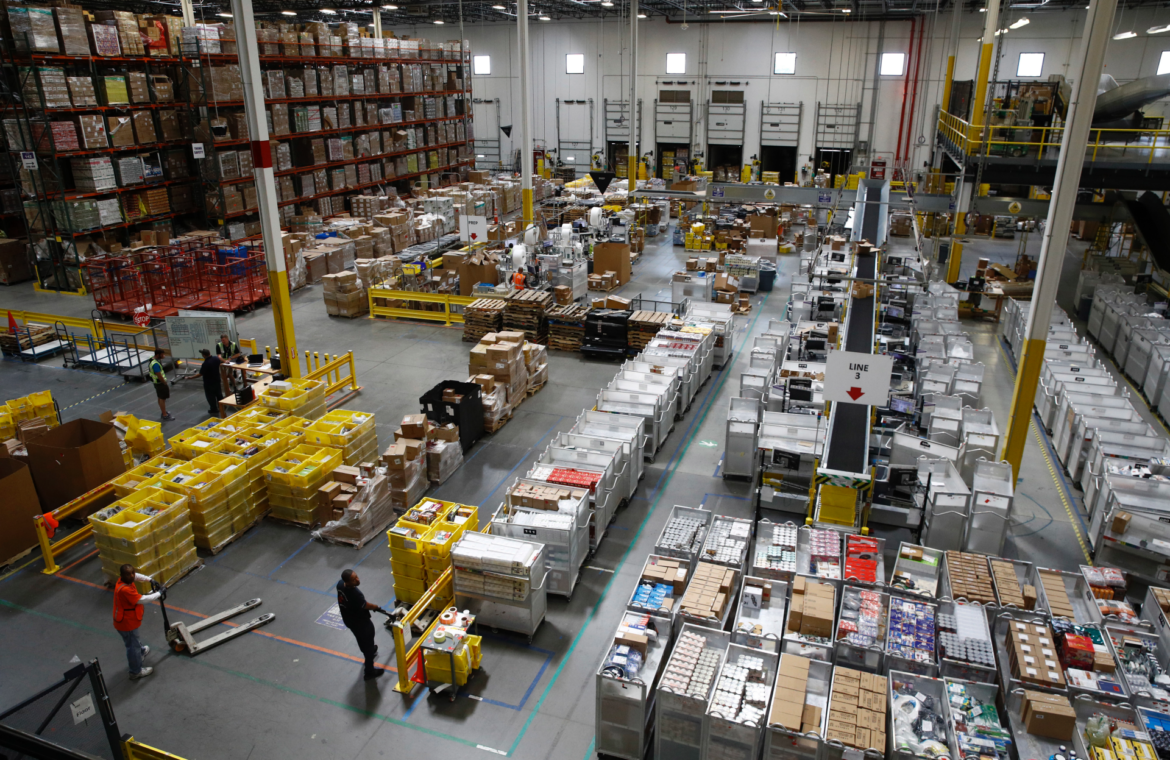 Amazon has fired two more employees who criticized the alleged lax working conditions at its various warehouses and fulfillment centers around the country in light of the coronavirus pandemic.

According to The Washington Post, which first reported the story, Emily Cunningham and Maren Costa had also previously criticized the climate policies of the Jeff Bezos-led company and had been warned about making public comments.

Cunningham posted to Twitter that she was matching donations up to $500 for warehouse worker safety. “‘The lack of safe and sanitary working conditions’ puts them and the public at risk,” she wrote.

In this Aug. 3, 2017, file photo, workers prepare to move products at an Amazon fulfillment center in Baltimore. (AP Photo/Patrick Semansky)

Cunningham subsequently tweeted that she and Costa were fired, adding “It’s a gift to be able to fight for something you love so deeply.”

Costa also tweeted that she was matching donations up to $500 to support warehouse worker safety.

“We support every employee’s right to criticize their employer’s working conditions, but that does not come with blanket immunity against any and all internal policies,” an Amazon spokesperson told Fox News via email. “We terminated these employees for repeatedly violating internal policies.”

In an interview with The Washington Post, Cunningham and Costa said they believed they were fired for their ability to get their points on climate change heard.

“Because of how effective we’ve been in getting Amazon to take leadership in the climate crisis, they’ve wanted me gone for a while,” Cunningham said.

“They were targeting the most visible leaders in an attempt to silence everyone,” Costa added.

In February, Bezos announced that he would be donating $10 billion to fight climate change, at the time calling it “the biggest threat to our planet.”

The firings of Cunningham and Costa are just the latest example of pressure Amazon has received from both lawmakers and its own employees over concerns for their safety and well-being.

In March, a group of four U.S. senators, including Sens. Bernie Sanders, I-Vt. and Cory Booker, D-N.J., wrote a letter to Bezos expressing their concern about the health and safety of Amazon warehouse workers.

Former Amazon employee Christian Smalls demanded that the Bezos-led company close its Staten Island fulfillment center for a deep cleaning after a worker tested positive for COVID-19 in mid-March. Smalls was later fired, with Amazon telling Fox News it terminated him because he violated several terms of his employment.

After the news of Smalls’ termination, New York City Mayor Bill de Blasio ordered an investigation into the incident. New York Attorney General Letitia James also issued a statement, saying “it is disgraceful” Smalls was terminated after he “bravely stood up to protect himself and his colleagues.”

Earlier this month, Amazon Senior Vice President of Worldwide Operations Dave Clark said the company was boosting the level of safety precautions it was taking at its various fulfillment centers, including checking temperatures of its associates. Clark added it was finally able to secure the “millions of masks” it ordered weeks ago.

On Monday, Amazon said it was hiring an additional 75,000 workers, on top of the 100,000 it previously announced, in an effort to keep up with surging demand for groceries and other essentials during the pandemic.

As of Tuesday morning, more than 1.93 million coronavirus cases have been diagnosed worldwide, more than 562,000 of which are in the U.S., the most impacted country on the planet.

GET THE FOX NEWS APP

Don't Miss it How will the Coronavirus change global politics? | DW Analysis
Up Next Boris Johnson: UK can turn the tide in 12 weeks – BBC News