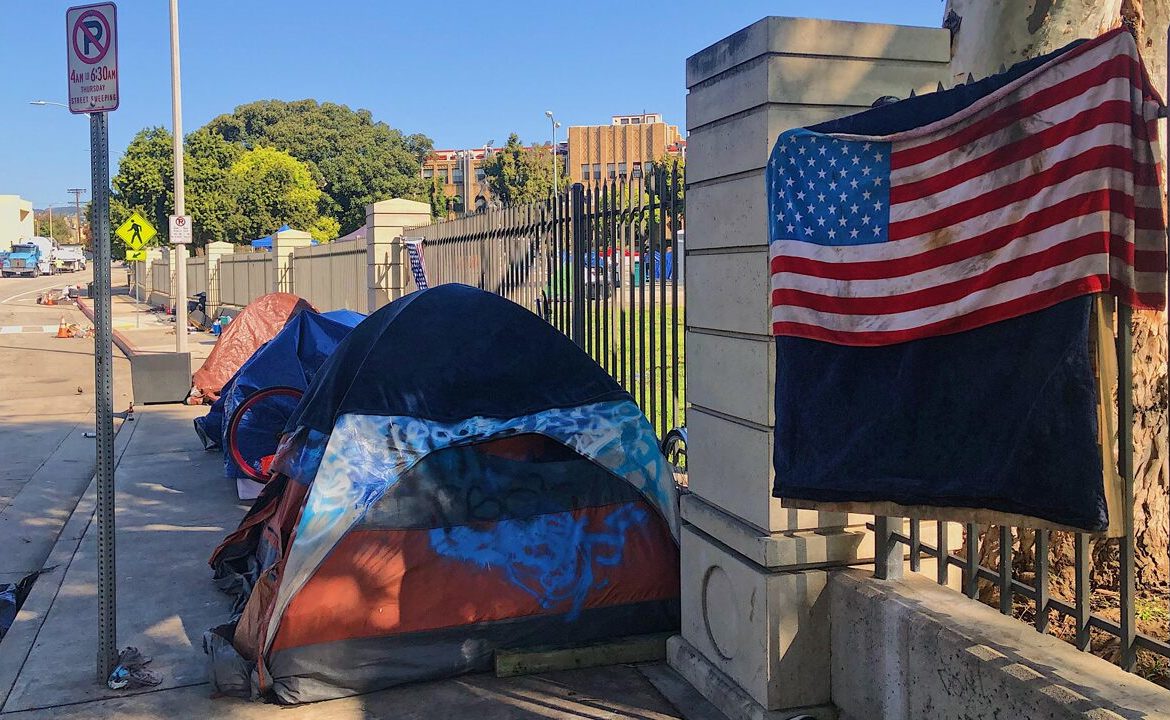 The novel coronavirus pandemic has forced officials across California to quickly rethink their plans on how to tackle the state’s homeless crisis as they try to prevent a mass outbreak of the contagion among a particularly vulnerable segment of the population.

With concerns being raised about the possibility of a mass outbreak in traditional facilities for the homeless like tightly packed shelters and group homes, the Department of Veterans Affairs last week announced that it was setting up a temporary tent city on the grounds of its sprawling campus on Los Angeles Westside.

Sitting in a parking lot adjacent to the Los Angeles National Veterans Park and tucked between the posh neighborhoods of Brentwood and Westwood is a cluster of about 25 tents draped in blue tarps – spaced at least six feet apart – that has become home to a handful of homeless veterans during the coronavirus pandemic. The temporary tent city,  the city’s first legal one in almost four decades,  also features toilets, handwashing stations, food stations and medical and psychiatric care.

The move to set up a legal tent city comes after a homeless man tested positive for COVID-19 while staying at a shelter in the San Fernando Valley and after 68 homeless people and two staff workers contracted the virus at a shelter in San Francisco.

The campground on the VA’s land is part of a wider move by local, state and federal officials to protect the state’s more than 151,000 homeless individuals from contracting the coronavirus.

Tents of homeless individuals still line the street outside the VA complex in Los Angeles.

Homeless encampments have for years been a ubiquitous sight around Los Angeles with small tent cities cropping up everywhere from freeway overpasses and alleyways to city parks and in front of public buildings. While both the city and the state have spent billions of dollars to tackle a crisis that continues to grow day by day and build more affordable housing, progress has been slow and the coronavirus has spurred an impetus to quickly find a stopgap measure to handle both crises.

In Los Angeles County – home to 44,000 homeless people, including 2,900 veterans – that has meant formerly allowing homeless encampments to remain in place as well as installing handwashing stations, portable toilets and weekly shower services in camps. Under the law, homeless tents in the city must come down between 6 a.m. and 9 p.m. but the mandate is not rigidly enforced.

Under a plan called Project Roomkey, the city is also trying to rent out 15,000 hotel rooms to house some of the state’s largest concentration of homeless during the pandemic. This is equal to the 15,000 hotel rooms California Gov. Gavin Newsom has promised to pay for with money from the federal government.

Toilets and handwashing stations are available for residents of the VA tent city.

“People experiencing homelessness are among the most vulnerable to the spread of COVID-19,” Newsom said last month. “California is deploying massive resources to get these vulnerable residents safely into shelter, removing regulatory barriers and securing trailers and hotels to provide immediate housing options for those most at risk.”

The move is part of a three-pronged LA County effort to get people indoors and safely distanced from one another. The county is also setting up medical sheltering sites with quarantine and isolation rooms for people who have tested positive for COVID-19, show symptoms while awaiting test results, or who have been exposed to the virus.

There are 44,000 homeless individuals in Los Angeles County with 2,900 being veterans.

In addition, temporary shelters have been set up at city and county parks and recreation centers, with beds placed at the recommended distance of at least 6 feet apart.

“We’re going big in LA,” said Heidi Marston, interim director of the Los Angeles Homeless Services Authority. “We based our goal on what the need is here.”

About 25 tents are currently up on the VA’s land with the possibility that more will be added.

In San Francisco Mayor London Breed recently issued an emergency declaration that allowed the city to rent 30 recreational vehicles to house any homeless individuals who have tested positive for the coronavirus. The city is also planning to rent 7,000 hotel rooms for the homeless.

San Diego recently moved more than 800 homeless individuals into a temporary open congregate shelter in the city’s convention center and is looking for hotel rooms for others.