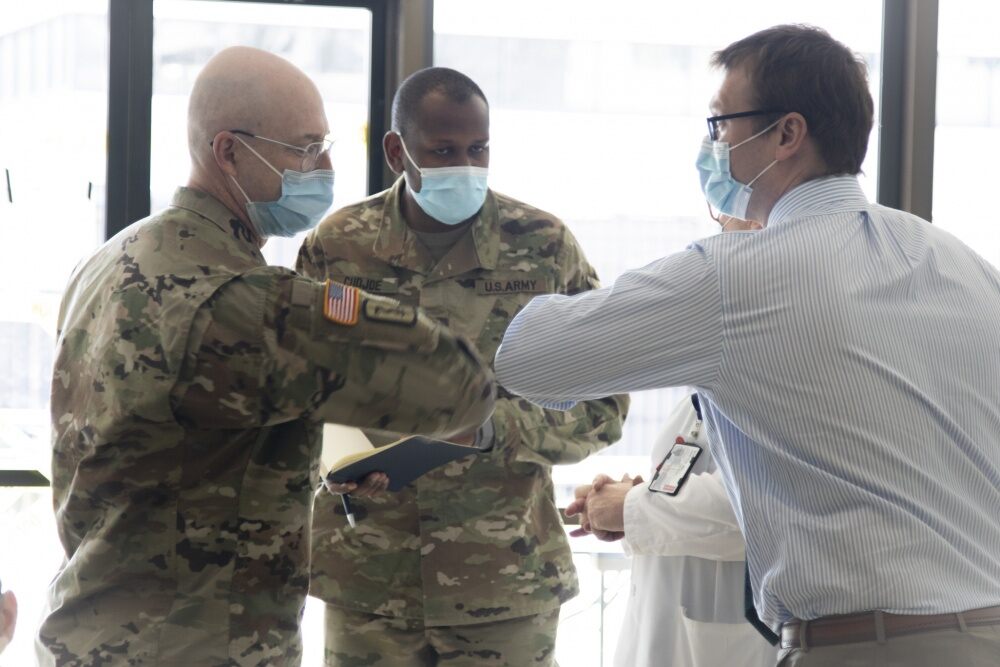 The coronavirus pandemic is taking a heavy toll on health care workers. One of New Jersey’s largest hospitals is struggling to cope while a third of their staff is out as a result of the virus. Help arrives this week in the form of the U.S. Army.

University Hospital, part of Rutgers University in Newark, has dealt with an onslaught of patients infected with COVID-19, pushing their resources and health care workers to the limit with over 240 patients testing positive. Making matters worse for the facility, more than 200 of the total 664 staff members have been forced to stay home as they have become infected or are caring for a loved one who is sick. University Hospital CEO, Shereef Elnahal, tells Fox News that starting on Wednesday, Army health care workers will start covering shifts for those workers in an attempt to keep up with demand.

“We are very strained on staff at the moment. The efforts are ongoing every day,” Elnahal said. “We just got a list of staff from a local agency and the U.S. Army is looking into helping us with staff. They’re looking to help because they’ve been staffing the field medical stations in central and southern New Jersey and the state was kind enough to make an introduction between us and some of their leadership.”

It was announced this week that University Hospital will be receiving approximately eighty-five healthcare workers from the Army’s Urban Augmentation Medical Task Forces. The group is one of three dispatched to hospitals throughout the state. Included among the workers are:

CORONAVIRUS: WHAT YOU NEED TO KNOW

Other units were sent to four hospital locations in New York City and one in Connecticut.

Last month, the state of New Jersey worked with the Army Corps of Engineers to quickly put together a plan to keep up with the demands to expand the capacity of available hospital beds across the state with the opening of four field hospitals including one in Secaucus, Edison, and Atlantic City respectively. They are also renovating the East Pavilion of East Orange General Hospital as a part of the state’s efforts to retrofit shuttered hospitals across the Garden State.

University Hospital, which treats a large amount of minority and charity care patients, has also had to convert many of their units for acute care just to keep up with the demand.

“We are the urban safety-net hospital for Newark. So, unfortunately, the disparities that we’re seeing with outcomes for patients with coronavirus are pretty glaring here,” Elnahal said. “We have a majority-minority population of patients and because folks have so many underlying medical problems, co-morbidities at much higher rates for the general population.”

“And so that means folks are staying longer in the hospital. They take a little bit longer to get off a ventilator. And unfortunately, they’re at increased risk of bad outcomes, including death, because of these underlying conditions.”

The head of University Hospital added that the vast majority of their patients has been infected with the coronavirus.

“We have patients passing away every day from this virus,” he says. “We’re not alone as a hospital and that experience. That’s just a function of seeing so many of them at once with severe disease. It’s the sheer volume of patients.”

Elnahal points out that the health care system is underequipped to deal with a surge of patients made evident in hospitals across the country as it deals with combating COVID-19.

“We’re seeing the first true global pandemic in a century, and what it’s showing is that we are systematically underprepared as a society for dealing with something like this,” he says. “And this underprepared this is not just in the realm of infectious disease. God forbid if there were a natural disaster in this region or something that caused mass casualties.”

Don't Miss it Michigan citizens protest over coronavirus stay-home order
Up Next Mike Haynes, NFL Hall of Famer, on how coronavirus changed his daily routine