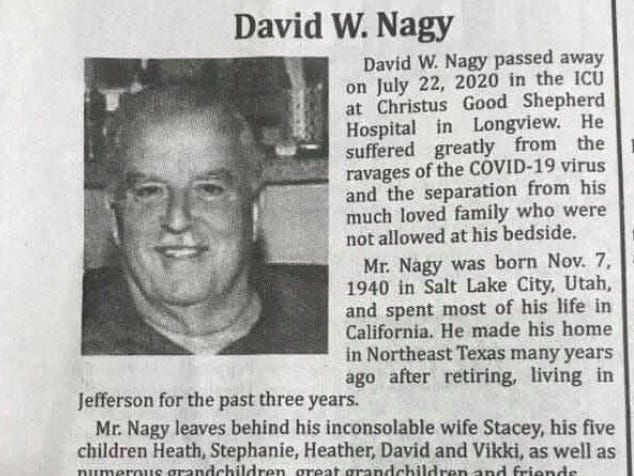 The widow of a coronavirus affected individual in Texas is blaming President Donald Trump, Texas Gov. Greg Abbott, and anti-maskers for her husband’s dying.

Stacey Nagy printed an impassioned obituary which ran in the Jefferson Jimplecute, according to a observe that Nagy wrote on Twitter.

“The blame for his death and the deaths of all the other innocent folks, falls on Trump, Abbott and all the other politicians who did not consider this pandemic severely and were far more involved with their acceptance and votes than lives,” Nagy wrote.

David Nagy, who died on July 22, is just one of nearly 7,000 Texas inhabitants who lost their life to the novel coronavirus.

Associated: 6 months of coronavirus in the United states of america, reviewed in 6 minutes

“The blame for his demise and the deaths of all the other innocent people, falls on Trump, Abbott and all the other politicians who did not choose this pandemic severely and ended up a lot more concerned with their attractiveness and votes than lives,” Nagy wrote. “Also to blame are the numerous ignorant, self centered and egocentric men and women who refused to stick to the suggestions of the health care experts, believing their ‘right’ not to have on a mask was much more important than killing innocent people today.”

The obituary ran in the Jefferson Jimplecute newspaper, and could not be discovered on the web. Quite a few folks have shared pics of the print edition of the obituary, which was published on July 30. Jefferson is a metropolis in japanese Texas, about 165 miles from Dallas. It has a inhabitants of around 1,961.

Some have tweeted copies of the obituary to Trump.

The obituary states that David Nagy, 79, died in the ICU at Christus Very good Shepherd Hospital in Longview, Texas.

Stacey Nagy described herself in the obituary as inconsolable, and indicated that her partner had been divided from household through his very last days. Health-related protocol needs that COVID-19 clients be isolated all through their treatment simply because of the highly contagious character of the virus.

“Dave did every little thing he was meant to do, but you did not,” Nagy wrote to the politicians and anti-maskers in the obituary. “Disgrace on all of you, and could Karma discover you all!”