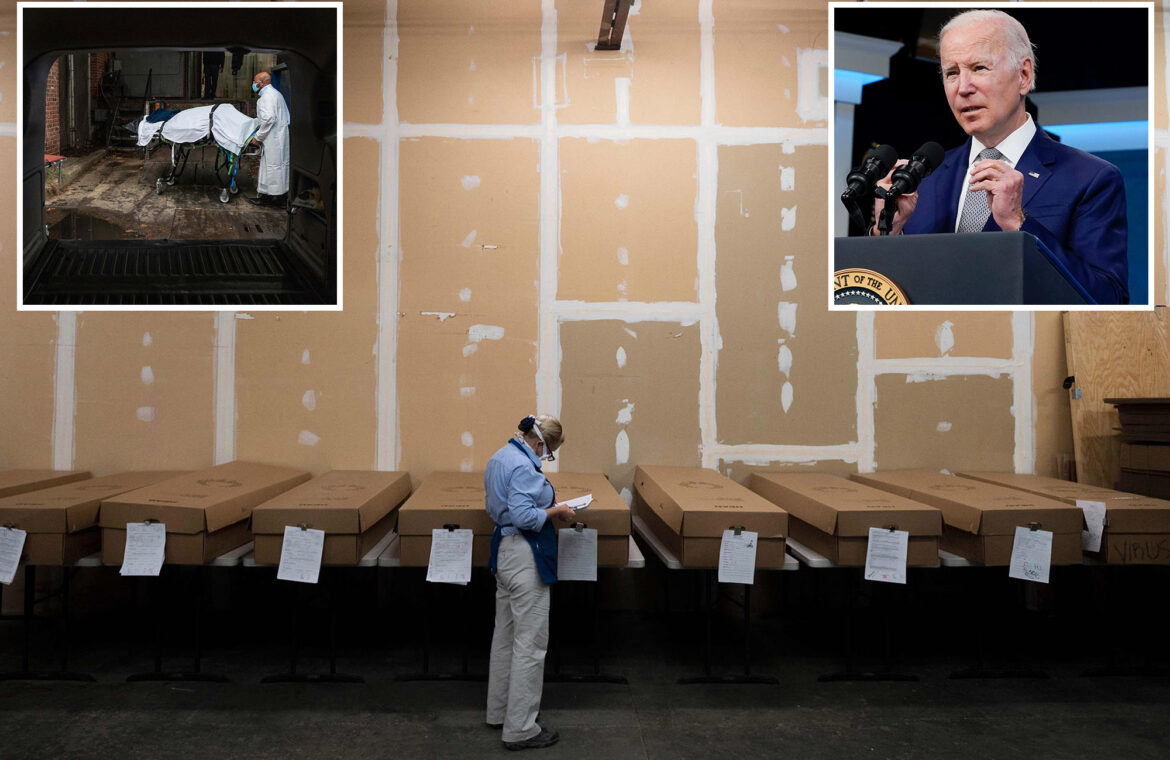 President Biden marked what he called the “tragic milestone” of 1 million US deaths from COVID-19 Thursday by insisting that Congress approve billions of dollars in new spending to boost America’s pandemic response.

“As a nation, we must not grow numb to such sorrow,” the president said in an early morning statement. “To heal, we must remember. We must remain vigilant against this pandemic and do everything we can to save as many lives as possible, as we have with more testing, vaccines, and treatments than ever before. It’s critical that Congress sustain these resources in the coming months.”

In March, the White House asked Congress to approve $22.5 billion to pay for COVID treatments, tests, vaccines and research. That request was pared by Hill negotiators to $15.6 billion before being cut out of legislation funding the government through Sept. 30 due to objections from Republicans.

Last month, Senate GOPers blocked Democratic efforts to move forward with $10 billion in new COVID spending by insisting on an amendment that would have kept the Title 42 health authority in place at the US-Mexico border. That policy, which allows for summary expulsion of migrants without allowing them to claim asylum, is set to expire May 23.

In March, the White House asked Congress to approve $22.5 billion to pay for COVID treatments, tests, vaccines and research.Manuel Balce Ceneta/APA crematorium supervisor checks the names on cardboard caskets containing bodies to be cremated.Andrew Caballero-Reynolds/AFP via Getty ImagesA crematorium worker brings the remains of a COVID-19 patient to his van from the hospital’s morgue.Andrew Caballero-Reynolds/AFP via Getty Images

Earlier this week, the White House attempted to link the spending ask to additional military aid to Ukraine, but Biden was forced to back down from that request as well.

“I have been informed by Congressional leaders in both parties that such an addition would slow down action on the urgently needed Ukrainian aid — a view expressed strongly by several Congressional Republicans,” the president said in a Monday statement.
“We cannot afford delay in this vital war effort. Hence, I am prepared to accept that these two measures move separately, so that the Ukrainian aid bill can get to my desk right away.”

Republicans have insisted that the new spending is not needed and argued the Biden administration should repurpose some of the billions of dollars in unused funds earmarked for state and local governments.

The American flag flies at half-staff at the White House in Washington, May 12, 2022.APFamily and friends attend the funeral of a loved one who passed away from COVID-19 complications.Paul Ratje/AFP via Getty ImagesA worker pushes a cremation box draped in the US flag, containing the body of a veteran who died of COVID-19, into an incinerator.Andrew Caballero-Reynolds/AFP via Getty Images

“My assumption is, of the $1.9 trillion sent out in March [2021], he ought to be able to find $30 billion from that figure,” Sen. Mitt Romney (R-Utah) told the Washington Post in March, referring to Biden’s American Rescue Plan stimulus, which passed Congress along party lines.

In all, Congress has passed about $5 trillion in COVID-19 relief, with most of the funds going to offset the economic impact of the virus.

The White House has argued that the repurposing of funds is not possible, with press secretary Jen Psaki telling reporters Tuesday: “We don’t have a Plan B here.”

“We will use the few funds we have remaining to continue getting tests, treatments, and vaccines out to Americans for as long as we can,” she said. “And we’re going to continue to work the phones, hold briefings, and make our case publicly and privately with lawmakers, imploring Congress to act immediately after our long — after — to help us on our long-overdue COVID needs.”