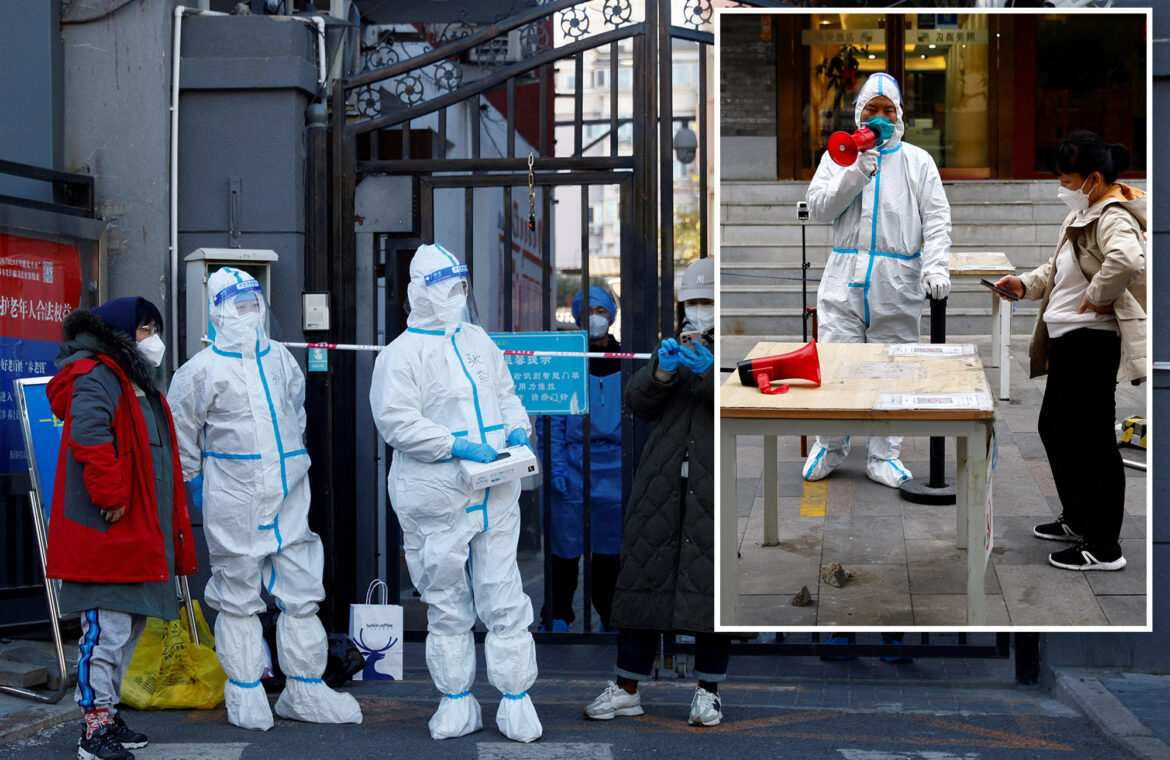 As much of the globe moves on from COVID-19, the nation at the epicenter of the pandemic is doubling down on its ultra-strict restrictions.

Chinese cities from Wuhan to Xining have locked down districts and sealed up buildings in response to new outbreaks in the world’s most populated country, according to social media posts.

China reported more than 1,000 new COVID-19 cases for three consecutive days this week, far less than the 260,000 reported in the US last week, but enough for a government clampdown in parts of the totalitarian country.

In Wuhan, where the world’s first COVID outbreak was reported in 2019, more than 800,000 people in one district were ordered to stay home until Oct. 30 after the city recorded just 240 cases over two weeks.

Security personnel in protective suits stand at the gate of a residential compound that is under lockdown in Beijing on Saturday.REUTERSResidents wearing face masks wait in line to get their routine COVID-19 throat swabs at a coronavirus testing site in Beijing on Thursday.AP

Sales of pork were also suspended in the central city after authorities tied one of the cases to the pork supply chain.

In 15 million-strong Guangzhou, streets were sealed off and people were told to stay indoors in areas deemed high-risk amid the resurgent virus.

Xining, a city of 2.5 million, was grappling with food shortages and inflation as officials imposed strict regulations.

“To reduce the risk of transmission, some vegetable and fruit stores have been closed and put under quarantine,” a Xining government official said Wednesday.

Foxconn Technology Group, which runs an iPhone factory that employs some 300,000 people in Zhengzhou, said a “small” outbreak at the factory was “controllable” and “operation and production” was “relatively stable.”

A worker in a protective suit guides people to scan QR health codes before taking a test for COVID-19 at a testing station in Beijing Thursday.REUTERS

“Health and safety measures for employees (are) being maintained,” the company said, while denying rumors that tens of thousands of workers were sick.

The manufacturer said it was “providing the necessary guarantees for livelihoods, including material supplies, psychological comfort and responsive feedback.”